In episode 6 of Monarch, everyone is gathered in Nicky’s house. They all are together to enjoy the award ceremony, which is being telecasted on television. First, we see the ‘Country Music Legacy Award Single of the Year nominee Gigi and Albie Roman for “You Were Always on My Mind.” After knowing that Gigi and Albie had won the award, all of the family members were delighted. After that second nominee was revealed to be Nicky Roman for “God Knows.” But Gigi didn’t find it pleasing that Nicky was also nominated. After the nominees were declared, they both shared an awkward gaze. 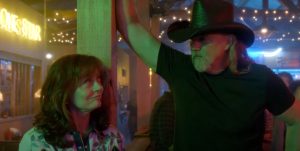 After a while, both Gigi and Nicky went to Luke’s office for a meeting. He told them about the duet. The CML people were delighted that both Gigi and Nicky were nominated and wanted both of them to perform a duet in the upcoming award show. After listening to this, Gigi was not pleased. She said that she was not comfortable performing a duet with his sister after she had been stabbed by her. But Luke made it clear that this duet is not about you two; it’s about the family, so he doesn’t care about their personal feelings.

On the award day, both Gigi and Nicky were on their to the show. Luke was guiding them on how to behave in front of the press. He told them not to give too many smiles and be straight to the point. And not say about each other. Not about stealing the song, just nothing. On the red carpet, a  photographer told them to stand next to each other for a photograph; even though it was a very hard thing to do, they still managed to forget their bitterness just for that day.

After performing the duet, the audience was delighted by their performance. And Nicky was too. She thought that after this duet, she and Gigi would be best friends again, but Gigi made that clear and told her, “this changes nothing.”

Nicky won the award for ‘Country Music Legacy Award Single of the Year, which shocked Gigi. But as soon as Nicky gave credit to her in the speech, Gigi left the hall. At the end of the episode, we see Nicky calling her dad and crying with blood all over her clothes.

Fortunately, spoilers are available. In the upcoming episode, we will see Nicky being desperate enough to prove to everyone that she is capable and she can perform a solo tour.

Episode 7 of Monarch, titled ‘ About Last Night, ‘will be released on Tuesday, 25 October 2022, at 9 PM as per the United States of America time zone. For the international audience, I’ve provided important and popular time zones below:

Where To Watch Monarch Episode 7?

You will be able to stream it on Hulu and Fox. They will also include previous episodes too.

What Is Monarch All About?

For those of you who aren’t familiar with this show, I’ll be providing a basic summary and a little information about the cast and the crew.

Monarch is a television series which is recently released on 11 September 2022. The show is airing the episodes on Fox and Hulu. The series’ main characters are Nicolette Roman, who is played by Anna Friel; Albie Roman, who is played by Trace Adkins; Luke Roman, by Joshua Sasse; and many more interesting characters in the series. Till now, six episodes have been released, with 7th episode in the line. The show is created by Melissa London Hilfers, with Hen Baghdady, Gail Berman, and Jason Ensler as the producers.

So since the series is new, there is very little to provide for the plot. But I’ll do my best to summarize it. Nicky or Nicolette Roman is a young aspirant who wants to achieve her dreams, but because she is born into the family of Roman, everyone, especially her parents, expects too much from her. But she is unable to live up to their legacy of producing high-quality country music.