In episode 2 of Bleach: Thousand-Year Blood War, at the start of the episode, we see Ludaas and Ibern being killed by Yhwach. In Ichigo’s room, his friends are waiting for him. After a few minutes, Ichigo arrives. Yuki, one of his friends, receives a call. All the squad members, including him, are informed about a tragic incident that happened near Kokuryo Gate. A total of 116 squad members are slaughtered, including Lieutenant Sasakibe. After hearing this sad news, all of them went to their homes.

The next day, while Ichigo is surfing in the sky, he meets Nel and Pesche, who tells him about Hueco Mundo being attacked. Ichigo couldn’t believe what they were saying since Hueco was under Halibel, who was very strong, and her being attacked seemed very difficult to imagine. So, he called his friends and gathered them to build a plan. Later it was decided that Ichigo would go with Nel and Pesche to rescue Hueco. But it would be a very difficult trip. Luckily Mr. Urahara makes a surprise visit which will make the travel way easier. 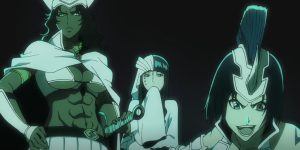 After they arrived, they witnessed Hollows and Arrancar’s dead bodies lying around them. Quilge Opie, who has gathered the remaining Hollows and Arrancar and told them to stand in a horizontal line, then asks them, “If anyone wants to work with us, tell us now. I’ll spare your life then.” One of the Arrancar takes the initiative and asks whether he can work within his team. But to his surprise, Opie stabs the spear into his heart. And told them he was just joking. While he was killing the remaining Hollows and Arrancar, two girls, Loly Aivernne and Menoly Mallia, who were hiding, attacked Opie with their katanas. But to their surprise, Opie was too strong; even before the blink of an eye, he slashed one of the girl’s arms and cut through another girl’s katana. He doesn’t order them because he is impressed by their bravery.

He is again confronted by three women, namely Mila Rose, Sun-Sun, and Apache Tres Bestia. At the same time, Ichigo and his friends were on their way to Quigle Opie. Nel, who is sitting on Ichigo’s head, tells him that it looks like Mila, Sun, and Apache have arrived. He told them that they were the strongest beasts who worked under Lady Halibel. At the end of the episode, we see Opie being easily able to defeat the three beasts.

There are no spoilers available for episode 3, but hopefully, we will be able to receive them a day or two before the release date. But it would be really interesting to see, after defeating the three warriors, who will win against Quilge Opie. Will Ichigo manage to beat him?

Episode 3 will be released on Monday, 24 October 2022, at 8:30 PM as per the Japan time zone. The show will be available to watch on Tokyo TV. It will also be available on Disney+, Hulu, and Bilibili. For the international audience, I’ve provided various popular time zones below:

What Is Bleach All About?

If you are new to all this, it is understandable you want to know what Bleach is. For a basic understanding, I’ll be providing a summary of the plot and basic information about the show. Bleach is a television series with its first episode being aired on October 2004. The series is an anime adaptation of the manga: ‘Bleach’ written and illustrated by Tite Kubo.

Ichigo Kurosaki is the main protagonist of this series. He is a young high school student who had an encounter with a soul reaper named Rukia Kuchiki. After a lot of persuasion, she convinced Ichigo to join the Soul Society, where he is being trained and faces challenges to become a perfect soul reaper.

The anime has been directed by Noriyuki Abe and is produced by multiple producers like Ken Hagino, Noriko Kobayashi, Yutaka Sugiyama, and many more. For a better understanding of the show, you can stream it on Disney Plus by paying a yearly subscription.