In Akane-banashi Chapter 34, After the first day in Joseki. Asagao, who is a Zenza, compliments his juniors on being able to complete all of their duties. But he is upset with one, and yep it’s Akane. She messed up. Because of this, Asago told her if she wanted to do any Rakugo, she would need to perform all of the given duties without making any mistakes. And if she ends up making any mistake again, Asago will not allow her to do Rakugo for at least ten days, as he is in charge of them. Akane is a bit annoyed but agrees to Asagao’s demands.

So just to make sure she doesn’t make any more mistakes, Akane asks Karashi how he can perform the given duties with such perfection even though he joined just a month before her. But Karashi is a bit cocky and tells Akane, ” I don’t care about you; it’s working for me.” But after a lot of persuasions, Karashi gave her a hint, ‘background listening.’ Now, Akane had never heard of this, so she asked him about it. “Well, while you’re working or having a conversation, always keep your attention on the stage,” Karashi said. 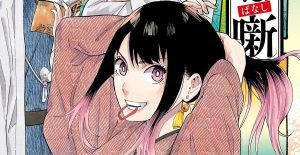 After receiving a very helpful tip, Akane gets the perfect opportunity. She is being asked to deliver tea to master Senba. As she tries to do ‘background listening,’ she is not able to focus on her work. And along with that, she is also asked to flip the cushion and deliver tea to Rien Konjakuan.

After 10 minutes, Karashi notified Asagao that Rien was scolding Akane for not using fresh leaves, even though she did use them. After hearing the name, Asagao sighed and told Karashi that he was known for destroying rookies’ morale, and he won’t need any valid reasons for it.

So, Asagao interrupts the scolding and apologizes to Rien on her behalf. After knowing Asagao’s name and rank. Rien digs at him. He said, “Well, if the students are working under an incompetent Zenza, no wonder they will work like this.” Even after the insult, Asagao didn’t react and stayed quiet.

Just before making a leave, he teases Asagao for one last time by reminding him that he is ‘Futatsume,’ a rank higher than him, so he should remember his place. 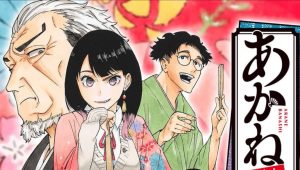 As Rien leaves the room, Asagao asks Akane how she was able to keep ignoring his insults. In reply, she said that she was actually ‘Background Listening’ while paying attention to Rien and Asagao’s conversation. After listening to her, Asagao had mixed feelings and asked her if she wanted to show Rien his levels tomorrow. In reply, Akane said, “YES, SIR.”

Akane-Banashi chapter 35 will be released on October 23, 2022, at 8:30 PM. For the international audience who is waiting patiently, I’ve provided the timings below.

Where To Read Akane-Banashi Chapter 35?

You can enjoy manga on the website Manga Plus which is available in the English language. You can access the manga as per the above-given schedule.

Akane-banashi is a manga in which Akane Oasaki is the protagonist, who wants to become a Rakugo, Japanese storytelling professional. From a young age, Akane has developed a keen interest in Rakugo. And to excel in Rakugo, she has been taking lessons from her father’s former teacher Shiguma Arakawa. The manga shows her journey to become the best Rakugo. And as we know, journeys are not straight; there are many obstacles and challenges she will have to face. And all the moments are captured in the manga.

Just for additional information, Akane-banashi was written by Yuki Suenaga and illustrated by Takamasa Moue and was first released on February 14, 2022. Since then, manga has been able to produce 3 Volumes with a combined total of 34 chapters, and this is still going on. The manga has been published by Shueisha. The show has been selected for the Next Manga Award.