My Hero Academia is a Japanese anime series inspired by the manga written by Kohei Horikoshi. The first season premiered from April to June 2016, which collected a massive number of consumer engagement. The series has been directed by Kenji Nagasaki, Tomo Okubo, and Masahiro Mukai. With Kazumasa Sanjoba as the producer. The series is animated by Bones studio and is aired on JNN and NMS television networks.

The show has been a huge success in the international market also, with over 65 million copies in sales, and received The New York Times bestseller award multiple times.

The main protagonist is a young high school student Izuku Midoriya who was born without Quirk. Quirks are the special powers an individual posses after hitting puberty. He dreams of becoming the world’s strongest superhero, just like his idol All Might. But in a world where superpowers are a necessity, it brings a lot of emotional and physical challenges to Miodriya.

But little did he know after an encounter with his idol. All Might he came to know about his worsening health due to the Battle with All for one. Half of his respiratory organ was destroyed, and his life span was reduced by half. Now to make sure the world is protected by heroes, he offered his powers to young Midoriya. But to be able to inherit the power, first, Midoriya had to develop a strong body. After 6 months of training, he inherits the power and begins his journey at UA high school.

At the start of the 2nd episode, we see Mirko barging through the main gate of the secret laboratory where Nomu is being created by using humans. After entering, she found Doctor Garaki, who was responsible for the creation of Nomu. Above the laboratory, we see Endeavor with other heroes fighting Nomus. He ordered Mirko to capture the Doctor. Midoriya is with his classmates in the town, where they receive an order to evacuate the civilians from the site.

Before Mirko takes any action to capture the Doctor, she’s distracted by a small Nomu, which gives her a chance for Doctor Garaki to escape. As Mirko kills the small Nomu, she is surrounded by High-Level Nomus. One of the High-Level Nomus manages to hurt Mirko on his arm. It is revealed that Mirko possesses a Rabbit quirk that enables her to perform everything a rabbit can but with more power. We see one of the Nomu possess a psychic quirk which he used to rip Mirko’s left arm. But still, she manages to defeat all of the High-Level Nomus. 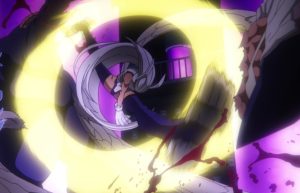 On the other side, we see a group of heroes led by Edge Shot, preparing to invade the villain’s headquarters. While preparing for the attack, we see Kaminari is nervous because he feels like he is not capable enough to be part of this group. But Tokyoyami assures him that he trusts his friend’s ability because Kaminari put’s his friend’s interest before his interest. This makes him feel less nervous, and he prepares for the invasion. But at the headquarter, the villains are still not aware of the invasion.

Before the guard alerts them, we see the heroes destroying their buildings. As the heroes approach the villains, the villain’s vice commander makes his entrance and using is a very high-level electric shot toward the heroes. To counter that attack, Kaminari makes the initiative and gets in front of the group. As the Vice Commander uses his attack, the Kaminari acts as a conductor and diverts the attack toward the ground. Because of his initiative, a massive part of the group manages to survive.

My Hero Academia Season 6 Episode 3, titled ‘One’s Justice, will be released on Saturday, 15 October 2022, at 4:30 AM as per Japan. For the international audience, I’ve listed the various popular time zone below:

Where To Watch My Hero Academia Season 6 Episode 3?

You can enjoy the show by paying a monthly subscription to Hulu. The show is also available on Netflix and Crunchyroll.