Murdoch Mysteries is a television series based on a novel by Maureen Jennings and Yannick Bisson. The series first premiered on 20 January 2008 through the City TV network. For the first 11 seasons, the series was titled The Artful Detective and was telecasted on the Ovation network. The series involves a detective named William Murdoch, who lives in Toronto and uses very advanced methods in his investigations.

The series took place in the late 19th century when equipment like fingerprinting, blood testing, surveillance, and trace evidence were very advanced for that time. The series also involves three important supporting characters: Inspector Brackenreid, Doctor Julia Ogden, and Constable George Crabtree. Inspector Brackenreid is a bold superior of Murdoch and has a completely different approach to an investigation than Murdoch. But the different thinking does not come in the way of their respect for each other.

Doctor Ogden excels in pathology and contributes her best skills to Murdoch’s investigations. In the series, we see Murdoch developing feelings for Ogden but is unable to convey his love. Constable George Crabtree supports Murdoch’s enthusiasm toward the use of more advanced technology. Throughout the series, he shows his loyalty toward Murdoch. Murdoch Mysteries is a crime-based series produced by Jan Peter Meyboom, Julie Lacey, Laura Harbin, and Shane Kinnear.

We see the couple Julia and Detective Murdoch with their daughter Susan beside a lake to have a picnic. On the other side, we are two men who are excited to witness the newly made motorbike ‘Falcon.’

While the couple was talking, we got to know that they have a son Harry who is at a boarding school and was almost expelled for seeking out girls outside the campus. Amid their conversation, we can hear Falcon engine noise. After a few seconds,  the couple hears a crash and heads toward the sound. At the crash location, they found a dead body that was dropped from the cliff alongside the motorcycle. 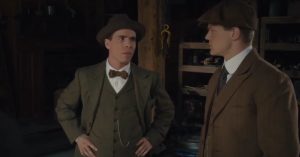 Murdoch, when spotting the dead man (Drumad), friends were above the cliff, so he went to them to interrogate them about the accident. On interrogation, it was revealed he didn’t have any motive to jump. Drumad wife told the Detective about his husband’s passion for building Falcon, and she cannot even imagine him taking his own life.

In his investigation, Detective met two motorbike engineers who came to meet Drumad’s famous Falcon. But instead of letting them go, Detective asked them to help him in understanding the reason behind the failure of the Motorbike. After hours of inspection, the engineers revealed to the Detective that the brakes had not been tampered with and which made the situation more confusing.

In the restaurant, he finds a man who breaks into the warehouse of Drumad and captures him on suspicion of killing him. But he denied all accusations. While talking to the forensic Doctor, it was revealed that Drumad was already dead before jumping from the cliff. This revelation shocked Murdoch as to how it is possible for a dead man to ride a motorcycle in the first place.

So his first suspicion was on his wife because how could she not be aware of his dead husband throughout the night? After interviewing, she told the Detective that her husband spent hours in the warehouse, so it was not unusual for her not to see him through the night.

After a thorough investigation, it was found that her wife had an affair with Drumad’s boss, and on the day of the falcon test drive, instead of Drumad, his boss drove the Falcon and covered his face to avoid getting spotted by the falcon club members. and when he reached toward the cliff, he got off the bike and pushed the bike off the cliff with Drumad on it.

Episode 6 of Season 16 will be released on 17 October 2022, Monday at 9 PM as per Canadian Time zone. For the international audience, I’ve provided various popular time zone below:

You can enjoy episode 6, titled ‘Clean Hands’ on CBC cable network. You can enjoy the previous season of Murdoch Mysteries on Amazon Prime, Hulu, Plex, and NBC.