Young Sheldon is a Television series and a prequel to The Big Bang Theory. The main protagonist is a 9-year-old boy who is living in East Texas and portrays the younger Sheldon from Big Bang Theory.

The story happens in the late 1980s and early 1990s. The young boy is gifted with very high intellectual capabilities and finds himself getting bored in High School. So after turning 11, he passed out from high school and started attending a University.

The show captures the young life of Sheldon Cooper, where he had to face a lot of challenges, whether it fitted in with others or issues in his family. All of this is presented to the audience in this TV series.

Sheldon Cooper is an intellectually gifted boy who really likes mathematics and science. While being intellectually gifted, the young boy finds it very hard to understand and fit in socially. He has an older brother named George Cooper Jr and a twin sister named Missy Cooper.

Surprisingly Missy possesses exactly opposite traits to Sheldon. She is average in studies but excels in Emotional Intelligence. With the begin able to perceive family situations much better and able to respond with emotional maturity.

Because of their difference, the majority of the time in the show, they will be seen fighting. But in a few instances, you can see how deeply they care and understand each other.

At the start of episode 2, we see the whole family together, sitting at the dining table. For dinner, Mary Cooper, Sheldon’s mother, serves a hamburger dish. Before usually eating, Mary chants ‘Grace’ but this time, because she was taking a break from her church duties, she let Missy, Sheldon’s twin sister, chant it. 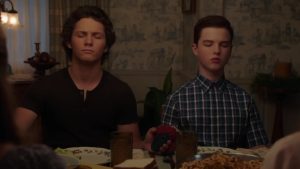 After eating dinner, the scene switches to Mary arranging the dishes. And we see George, Sheldon’s father, asking Mary to drink with him. In return, Mary told George that just because she is having a break from church duties doesn’t mean that now she’s a drinker. After which, George politely walks away.

In Sheldon’s room, Missy walked in and asked him about their family’s financial condition. Since Sheldon is the one who calculates their house taxes, he knows all of the income and expenses.

In response to it, he said, “Before Christmas, all our savings will dry up.” Then the worried Missy asked him how they could earn more. Sheldon replied, “we can sell our stuff.”, which Missy didn’t like because she really adores her stuff. Then Sheldon agreed with her and asked her to think of more ways to earn money. 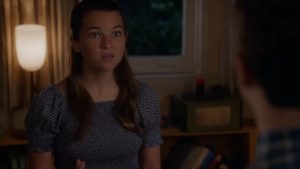 In Meemaw’s house (Sheldon’s grandmother), Grant Linkletter calls her phone and asks her out to a restaurant. After taking a moment, Meemaw accepts the invitation.

After brainstorming, Missy and Sheldon came up with a very weird solution. Like, him telling a stark trek story to the public, and Missy suggests letting him be punched for a few bucks, which Sheldon refuses. Stating all the profits will end up in their medical expense.

At the Bowling Alley where Mary is now working, she has an encounter with Pastor Rob, with whom she used to work in the Church. They had an awkward conversation.

In search of finding ways to earn more, Sheldon went up to his older brother Georgie to start a decentralized currency system, where people would pay them in exchange for the currency. After listening to his idea, George asked, “So, how much would we require to start this thing.” Sheldon replied about half a million. After listening to the amount, George kicked Sheldon out of his room.

3rd episode is titled ‘Passion’s Harvest and a Sheldocracy’ and will be released on October 13, 2022, Thursday. The show will be available on the CBS network at 8 pm as per US timing.

You can enjoy Young Sheldon Season 6 Episode 3 on Amazon Prime, and the show will premiere on the CBS network. With other streaming platforms like HBO max, FUBO TV, and Direct TV. You can also purchase a paramount subscription for high-quality videos.