Kurulus: Osman is a historical drama with Burak Ozcivit as the main character. The drama is created by Mehmet Bozdag. The show is inspired by the life of Osman I, who founded the Ottoman Empire.

The show tries to capture the internal and external challenges faced by Osman Ghazi and how he overcame the challenges and founded Ottoman Empire. In the show, the main character Osman struggles to face his enemy. He also had to counter the traitors who roamed around him.

The series currently has 4 seasons, of which the 4th season is currently airing. The show is the post-event of Dirilis: Ertugrul, who was Osman’s father. He, too, had to face his enemies and traitors.

The show is directed by Ahmet Yilmaz and written by Mehmet Bozdag, Atilla Engin, Asli Zeyneyp Peker, and Bozdag.

In season 3, we see Malhun learn that Bala is pregnant, or because of that, she is jealous of her. At the end of the 3rd season, Osman tries his best to prove his brother’s innocence and is planning to build a future empire. While his conquest, he came to know that his elder brother Gunduz and his mother Selcan had passed away.

The show aired 27, 37, and 34 episodes in the previous season, respectively. 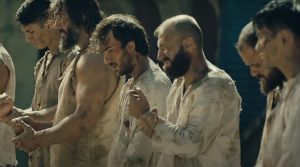 In the 1st episode of Kurulus: Osman Season 4, we saw many strong men coming out in a stadium, with a huge crowd surrounding them. Then all of the strong men start roaring and showing their confidence to the crowd.

Then we see a couple of men with their leg chained, who are presumed to be prisoners, enters the stadium, and as soon they enter, the crowd starts booing them. In the crowd, there are 2 mysterious men and 1 mysterious woman watching the game closely.

Then the guards release the chains from the prisoners. And among the guards, there is the general who introduces two strong men to the crowd, and he calls them Rufus and Niko. And assured the prisoners that if they defeated these strong men, they would be released.

After a few minutes, The King showed up, greeted the audience, and took his seat. After a  few seconds, the king bangs his sword onto the ground 3 times and declares the start of the battle. 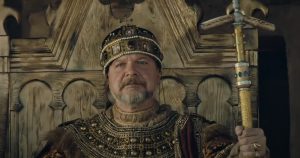 All the prisoners start picking up the swords in panic. As the battle begins, as presumed, the prisoners are getting overpowered by the strong men, and the king laughs in amazement. Then between the battle, the two earlier mysterious men in the crowd jumped into the stadium and revealed themselves to the king and the crowd.

Then the scene shifts to one day before the battle, where we see one of the mysterious men getting ready and a small kid running throughout the palace. The mysterious man walks inside the palace with two people behind him. As soon as he entered the palace, everyone started hailing him.

Then a goat is brought in front of the mysterious man, with its eyes covered with a brown cloth and legs tied with a rope. The mysterious man pulls out his knife, and As he starts approaching the goat, everyone starts saying, “Allah hu Akbar,” and he slits the throat of the goat.

Then the scene shifts towards two men who were riding horses entering a marketplace and stopping for drinking water, after which they talk about the battle which was going to after tomorrow. Both of them were very excited. 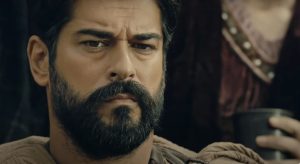 After this, the scene shifts to the mysterious man who is inside his room. We see him praying to the lord. After which, the episode ends.

Episode 2 will be released on 12th October 2022 at 8 PM Turkish Time. Its international timing is as follows: