Management of Novice Alchemist originally is a light novel by Mizuho Itsuki. They started publishing their novel in November 2018. First, it was Shosetsuka ni Naro who published their work; then later, it was acquired by Fujimi Shobo, who has since September 2019 published six volumes. In October 2022, ENGI released its anime version.

The protagonist is a young girl who was orphaned after her parent’s death. And after knowing about people could become rich by becoming Alchemist, she started attending a dedicated school. Sarasa Feed’s voice actress is Kanon Takao. Alongside Hina Kino, Saori Onishi, Nanaka Suwa, Mitsuki Saiga, and Ami Koshimize, who voice acts Korea, Iris Lotze, Kate Starven, Ophelia Millis, and Maria, respectively.

On 3rd October 2022, Management of Novice Alchemist episode 1 was released with Marina Maki as the director.

Episode 1 starts with Sarasa Feed being informed about her parent’s death. She was told her parents were killed by bandits. After which, she was sent to an orphanage. In order to lessen the pain of her parent’s death, she tries to study a lot. After a few days, an Alchemist visits the orphanage. The Alchemist told the children that she used to live here as an orphan and wanted to help the orphanage by donating some money.

In order to earn the certificate, she went to The Royal Alchemist Academy. Where she had to study, train, conduct research, experiments, and work as a part-timer just so she could pay her living expense. And all this she had to endure for 5 years. At her part-time place, she found a Master level Alchemist named Ophelia Millis. She was the one who mentored Sarasa about Alchemist. 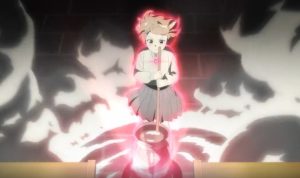 After 5 years, it was finally time for the graduation exam, which would decide whether all her hard work would pay off or not. The exams were divided into two parts: the first was the theory, and the second was practical.

After giving the theory exam, Sarasa looks very confident about the theory results. But when it was the practical examination turn, she got nervous and recalled how only 1 out of 10 graduates because of how hard the examination was. After a student’s turn, the instructor calls Sarasa names. Then she entered the examination hall, where she was asked to perform an intermediate-level potion using the available ingredients.

This surprises the examiners because they never expected a student to perform such a difficult level potion. After which, they gave Sarasa the graduation certificate. As a graduation gift Ophelia gives her an alchemist’s bag, which she herself enchanted.

Now, after acquiring the certificate, she came to know that she would require a high-level certification before advancing to the master’s level. After working for 5 years as a part-timer, she was able to accumulate 5 million yen. And used it to buy her the necessary equipment and planned to set up a shop in a tiny village in Gelba-Rohha Mountains.

So she started her one-month journey only to end up finding a broke down shop.

Episode 2, titled ‘Mura ni Yattekita!’ will be released on 10th October 2022. Which is directed by Yuki Kanazawa.

Where To stream Management Of Novice Alchemist Episode 2?