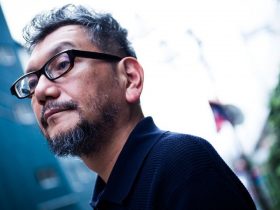 The short animation movie ” Tomorrow’s Leaves ” produced by Studio Ponoc, known for ” Mary and the Witch’s Flower, ” will be released on the official website (https://olympics.com/ioc/the-olympic-) from 7:00 pm on July 23. It will be delivered as foundation-for-culture-and-heritage / arts-and-culture / tomorrow leaves).

This work was produced as an art commemorative work based on the spirit of Olympism in collaboration with the Olympic Cultural Heritage Foundation. Studio port knock worked on the short story “Samurai Egg” Yoshiyuki Momose supervision, ” Memories of Marnie ” of Muramatsu TakashiTsugi has served as music, children both born and raised place cultural language different, each “tomorrow. The figure is drawn running through the “leaves” in his hand. The screening time is 8 minutes and 27 seconds.

In addition to the distribution on the official website, it will be screened at United Cinema Toyosu in Tokyo from July 23 to 29. Admission is free, and an original postcard will be distributed as a privilege.

The film will be screened for free until September 5 at the Tokyo Skytree observation deck “SKYTREE ROUND THEATER.”

The full comment from Studio Ponoc producer Yoshiaki Nishimura is as follows.

[ Yoshiaki Nishimura (Producer)]
While thinking about the children’s “tomorrow,” the creators of Ponoc made a short movie. Screening in each country has become extremely difficult. Still, I am grateful for the time when movies can be delivered to children in Japan and around the world via the Internet. 8 minutes 27 seconds. I hope you feel something meaningful.