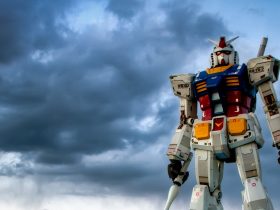 Following several delays due to COVID-19, the Mobile Suit Gundam film Hathaway’s Flash is scheduled to release in June 2021.

Focusing on a character touted as Amuro and Char’s spiritual successor from the first series created by Yoshiyuki Tomino, Hathaway’s Flash movie promises another action-packed entry in the popular mobile suit franchise.

La Verdad Noticias recently shared that the director of Gundam Seed confirmed a sequel to Gundam Seed Destiny and Hathaway’s Flash movie kicked off with the long-awaited return of the franchise.

The film Hathaway’s Flash will begin its theatrical release in Japan on June 11, 2021, it seems that Gundam fans won’t have to wait long to see this new entry, but theatergoers will also receive a special physical copy of the film.

Since the film’s Blu-Ray will also be released on the same day as the film, Hathaway’s Flash will be available in many different ways in the East, although a Western release for the film has yet to be revealed. Currently, the film will have a competition with Evangelion Thrice Upon A Time and Kimetsu no Yaiba: Mugen Train.

Updates for the Gundam universe

Sunrise’s animation studio has long been linked to the Gundam franchise, having created several different series and movies in the long-running mecha series. Having also lent his talent to characters like Cowboy Bebop, Inuyasha, Gintama, and many other greats from the anime world.

From the images that have been shown in the trailers and promotional material, it appears the studio is looking to get it out of the park once again. Throughout 2020, Gundam suffered major setbacks, one of the most important being the delay in its participation in the Tokyo Summer Olympics and the G-Satellite.

Although Olympic plans were frozen along with the event itself, the franchise was able to help facilitate the arrival of the ‘Walking Gundam,’ a life-size statue of a mobile suit that can walk on its own. Are you excited about the arrival of Gundam Hathaway’s Flash?