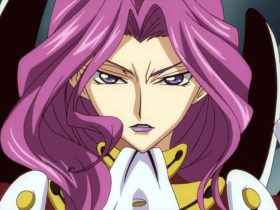 The 8 Most Popular Anime Girls With Purple Hair

The author apologized on his Twitter and said he will have a checkup this month.

Through his official Twitter account, author Izumi Itou posted an update noting that the Machikado Mazoku manga (The Demon Girl Next Door) went on another month-long hiatus due to a decline in his physical condition. Itou wrote, I am sorry to inform you that I had to take a sudden hiatus when leaving Manga Time Kirara Carat without a new chapter of Machikado Mazoku this month, as my health deteriorated while working on the manuscripts. I’m sorry.

He continued I suffered a mysterious drop in my blood pressure reaching below 80 and a series of symptoms of abnormal tachycardia even when I wasn’t exercising. I’ve been working slowly for the past ten days, so I apologize for not finishing the chapter on time. I didn’t get an appointment with the specialist until the end of the month, but I have a lot of medical exams scheduled for tomorrow, so I’m going to have a full checkup.

After a strange dream of a mysterious ancestor, high school student Yuuko Yoshida wakes up and finds that she has created demonic horns and a tail. Stunned and confused, her mother reveals to her a dark family secret: her family is descended from a Dark Clan that was exiled to live helpless by her mortal enemies, the magical girls of the Clan of Light. The only way to end the curse of his ancestors is for Yuuko to find a magical girl, kill her and spill her blood on the demon god statue of her ancestor.

Fortunately for Shadow Mistress Yuuko, a magical girl saves her from being hit by an oncoming truck. Unfortunately, Momo Chiyoda is Yuuko’s classmate at Sakuragaoka school and is much stronger than she is in strength and endurance. Sympathizing with her weak attacker, the magical girl agrees to train Yuuko and help her unlock her sleeping powers. Now, Yuuko must rise and defeat his generous enemy friend to save his family from the terrible curse of poverty.

Itou publishes the manga in Manga Time Kirara Carat magazine by Houbunsha since 2014. The publisher published the sixth compilation volume in February 2021. The work inspired an adaptation of twelve episodes for anime produced by JCSTAFF studios, directed by Hiroaki Sakurai, and screenplays written by Keiichirou Ouchi, released in July 2019. The production of a second season is confirmed.