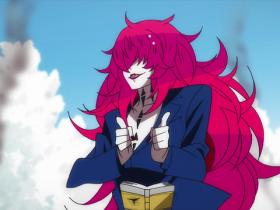 In the Japanese TV variety show “Mahōjin Guru Guru” broadcast on the 26th, the popular project “Daredare?” Send “Cosplay Show”. The appearance of the popular anime character is the acrobatic Johnny’s H. Show the determined pose that you are accustomed to shooting, and perform a sharp dance. However, after the character “Mushi”, the variety promised the game What’s inside the box? A fierce scream that does not look like a handsome man. In addition, de-natural remarks also pop out.

This time, in addition to the moderator Hiroyuki Yabe, the announcer Risa Ozaki also cosplayed as a rainy day character. The strongest cosplay show in history begins with Yabe’s yelling. The answerers are Hironari Yamazaki, Suzu Yamanouchi, and Einstein. Can you really see the strongest makeup technique? It was the big celebrity N who appeared as the main character of the masterpiece movie “Hands are scissors”. Respondents praised the make-up as “very good quality!” Takashi Okamura, a reporter to a celebrity in a separate room when he asks for a hint, N suddenly ignores the question and goes out of control. From that situation, Yamazaki sees, “Isn’t it a person who is hard to get involved?” It was the newlywed actress N who became a famous CG character with long green hair. Everyone was surprised at the good style that is not different from the character, saying “great style” and. Okamura also gets very excited when he approaches N and takes a picture, saying “It’s super cute!”. However, when N shows a special skill that his body is soft, he gets confused by a certain pose from Yamazaki. In “Avatar Ogiri”, a celebrity will challenge Ogiri again in her avatar. The moderator is Yabe and the guest is Karen Takizawa. Okamura also becomes an avatar and challenges Ogiri with five guests. Among the guests are the champion, the champion, a re-break entertainer, and the famous actor S, who plays the role of a former child who seems to have nothing to do with Ogiri. If it’s not interesting, everyone will be frightened by the rules of hell where one person will be dismissed for each theme. Y, who dressed as a gal’s avatar, made good use of the tone and characteristics of the gal, and showed the strength of the champion, and gave a series of good answers. In addition, what does Shirakuma, a soldier who talks too much, answer with the intention of the Grand Prix champion? In “Aiueo Sakubun,” which uses the four characters the doll’s avatar O, who completes a splendid Aiueo composition and shows skillful skills, is seriously burned. Also, there is a suspicious avatar T who just makes excuses after answering. Okamura always drops out early, but this time he is full of confidence. Who is the avatar who survives to the end? Takizawa bursts into laughter at a series of interesting and unusual answers.