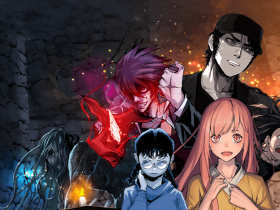 The author of Kaifuku Jutsushi in Yarinaoshi (Redo of Healer), Rui Tsukiyo, appeared for an interview with the YouTuber, The Man Anime. The author presented himself in costume in order not to reveal his true identity and answered some issues related to his work and his background.

TAM: In the past, you posted on Twitter: “ I am surprised that Kaifuku Jutsushi on Yarinaosh I has a relatively high proportion of female viewers (calculated from subscriber statistics for streaming sites). ”Do you have any idea why this proportion was relatively high?

Rui Tsukiyo: To be honest, I was also impressed by that. Who would have thought of that? The story has a masculine point of view, so I thought that men would be the main group of spectators.

Rui Tsukiyo: Yes. They are full of sex scenes. Let me present a common scenario from there. You have a woman full of jealousy, so corner the protagonist boy and force him to abuse her. So don’t you think women like to read about rape?

TAM: What motivated you to write this type of story?

Rui Tsukiyo: I deliberately wrote something that I knew would sell well. There is a website called Shousetsuka ni Narou where users upload their novels, and many of the site’s most popular entries were stories about revenge. As I saw that they were popular and I also like them, I thought I could write mine. However, these stories were very weak. They keep talking about revenge, but after about two or three chapters the revenge part ends and becomes the story of a broken protagonist with a harem. After reading them, I thought, “I’m sure I could write something much more intense than that.”

TAM: (laughs) They didn’t have enough revenge then.

Rui Tsukiyo: I asked myself, “ How could I take a story like that to its limit? Can I create a revenge story that doesn’t end in some chapters? ”It sounded complicated, but I wanted to capture my excitement about writing it. Kaifuku Jutsushi no Yarinaoshi was born then from the desire to create an extensive history of revenge.