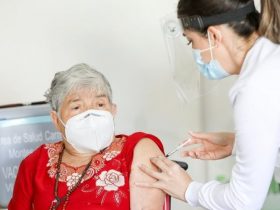 Mexico, Chile, and Costa Rica Starts their Covid-19 Vaccination Throughout the Country

Hello readers, the spring season has arrived and with it great premieres. This time we have an incredible variety and quality, having something for all tastes.

Adapting the manga of the same name, Super Cub is about a girl who has no parents, friends, dreams, or goals: an empty and lonely girl, living her life without color, until she decides to buy a motorcycle, a Super Cub and her life begin. to take color.

I know: the plot does not sound very flashy but there is something special in this anime since it is full of moments where the protagonism in daily life, celebrating it in style. There is talk of motorcycles but until now the anime has focused on finding something that makes you feel happy to be alive. That is why it is on this list.

If you like motorcycles and more introspective stories, give Super Cub a try.

Mars Red (Signal. MD)
A mixture of Japan from the 1920s and vampires cannot go wrong, but it goes beyond being entertaining: the aesthetics and atmosphere that this anime creates are very different from those of other proposals of the season. The plot is simple: there is an increase in vampires in Japan and to combat them the government decides to form an army of vampires (that’s right: vampires hunting vampires) commanded by Maeda, a war veteran.

Adapting the manga of the same name, I reiterate, Mars Red does not stand out for a sublime story but watching it is a very enjoyable experience. Give the first chapter a chance and you will know what I’m talking about.

86 (A-1 Pictures)
The “Juggernaut” is unmanned combat drone developed by the Republic of Saint Magnolia in response to attacks by autonomous drones from Gilad’s neighboring Empire, the “Legion.” But in reality, the fact that they are unmanned is a sham: the truth is that they are piloted by the 86, those who consider themselves less than human and those who treat them as mere tools. Determined to fight to the end, Shin, captain of a squad made up of 86, fights tirelessly on a battlefield where the only thing that awaits him is death.

Here’s a war anime, which goes beyond war and mecha action; we have something like the fourth season of Attack on Titan, with humans enslaving others. In 86 I like how the squad is treated, making you love them even if they are in the middle of a war and you know well that at any moment they can all die. It also seems that the story still has saved triggers; for now, it is very enjoyable.

Mashiro no oto (Shin-Ei Animation)
The late grandfather Setsu Sawamura was a prodigy of the shamisen (traditional instrument of Japan); his grandfather taught him and his older brother everything he knew. Since her grandfather died, Setsu left her hometown and went to Tokyo where she must rediscover her passion for Shamisen and thus find her own sound.

Thus begins a story that is about finding your place in the world and expressing it with music, giving us very good Shamisen pieces. This anime has many similarities with Your lie in April (in the creative-musical section) and with Barakamon, being one of those stories that enjoy walking the road before reaching the goal.

Tokyo Revengers (LIDENFIMLS)
The long-awaited adaptation of Tokyo Revengers finally arrives: this is a shounen manga that has been very popular in Japan. The story introduces us to Takemichi, a man who is around 25 and whose life has been a constant regret. One afternoon, while watching the news, he learns that Hinata, his former high school girlfriend, has been killed by the Tokyo manji Gang. The next day Takemichi is pushed onto the train tracks causing him to time travel for 12 years, right up until when he was in high school and Hinata was his girlfriend. In order to save her from that event, Takemichi must infiltrate the Tokyo manji Gang and thus be able to change the future.

I will say it as a reader of the original work: Tokyo Revengers is a masterpiece; the time travel plot may not be original but it mixes it with a gang and mafia plot that is VERY enjoyable and beautiful. The characters are memorable and there is a lot of pain, crying, and blows. It does so many things well that I cannot compact them in a few words. Give it a try and you won’t be disappointed.

Shadows house (Cloverworks)
Let’s move on to the mystery anime of the season: Shadows House is a fresh proposition and again Cloverworks shines with a wonderful adaptation. The shadows live in a mansion assisted by living dolls that clean the soot that they expel; as shadows, they are totally dark and their facial expressions cannot be seen so they also use the dolls as their faces.

I know that the plot, to put it in some way, is rare and continues to be when watching the anime, but that is what arouses interest chapter by chapter: it is an anime that knows how to give information but without being reserved or rushed. And little by little his world is expanding, which makes you want to see the next chapter now. Very similar to the first chapters of The Promised Neverland.

Oddtaxi (OLM, PICS)
Here are the furros of the season. Oddokawa is a taxi driver who leads a normal life and who, together with his two friends, will make us witnesses of parallel stories, but which in turn connect.

Oddtaxi is not, at first glance, striking, but it is a great surprise since it combines current society themes such as social networks, depression, love, lack of identity, loneliness, and much more in a colorful anime and full of surprises that a great repertoire of characters gives us, all with their problems but similar in the background. I am surprised by how critical this anime is but without yelling it in your face but rather works under subtleties, always giving inferences and never conclusions. And by the way, the opening is … it’s pure gold.

Hige wo Soru. Soshite Joshikousei wo Hirou (Project No. 9)
Another pleasant surprise is Hige wo Soru, one of those series that has everything to go wrong and very little room to go well. Yoshida is an office worker who has just been rejected after being in love with his boss for 5 years: that same night he drinks a lot and, on the way to his apartment, he meets a 16-year-old girl on the street, who asks him to allows him to stay that night in his apartment, which Yoshida, drunk, accepts. Upon waking up the next day, Yoshida is living with Sayu, a schoolgirl who ran away from home.

Do they see him? It is a plot that in the wrong hands can fall apart. Sayu is a girl who without money discovered that her only way to survive in this world is sex until she meets Yoshida, a man who genuinely cares for her and who curses all those adults who took advantage of a homeless girl. This is an example of how this anime works: it goes beyond adventure, romance, or comedy, working with two people who inadvertently formed a home.

Fumetsu no Anata e / To your eternity (Brain’s Base)
Now let’s talk about “the anime” of the season: I don’t remember a first episode reaching me that much; how well he adapts the beginning of this beautiful story is incredible. It only took one episode for the entire internet to cry. Let’s remember that this work is from the creator of A silent voice, so she knows how to make you feel things (and boy is she going to do it).

To your eternity is about a sphere that is sent to Earth, which has the ability to take the shape of the things with which it comes into contact; on your way, you will know, experience, and feel new things.

If you are going to see something from this season To your eternity is that anime, it is shaping up to be the best of the year, we already reviewed the manga, so it goes without saying that it is a unique work.

Fruits basket The final (TMS Entertainment)
The final season of this new adaptation of Fruits Basket arrives this April, which is perhaps the best arc of the entire work; We will discover more secrets of the Soma family and its leader Akito. More tears, more feelings, more smiles, more love – that’s Fruits Basket.

Boku no hero 5 (Bones)
The new season begins for our aspiring professional heroes, who must continue training to exploit all that potential before the villains come out.