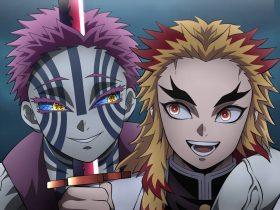 Akaza and the 12 Kizuki that appear in Mugen Train explained

According to the discussion, the problem arose because Netflix did not censor anime in other regions.

The Yahoo! News Japan published a negative receptivity of the South Koreans with the animation Kimetsu no Yaiba (Demon Slayer), an adaptation of the manga by Koyoharu Gotouge.

According to an article published on the portal, the earrings of the main character Tanjirou Kamada make reference to the imperial flag of Japan in World War II. For many, it is a way of remembering the massacre of Japanese battles in the region of China and South Korea.

This issue has been discussed previously at the launch of Kimetsu no Yaiba on Netflix in South Korea. The promotional banner for the animation shows Tanjirou Kamada’s earrings uncensored, which caused criticism from the South Koreans about the platform. It is important to note that Netflix was the only platform in that country that published the series “without censorship”.

The debated issue is that although the animation is broadcast by Netflix with censorship on the character’s earring, in other regions this is not applied. As is the case in Australia.

In the article we can read:

The protagonist, Tanjirou, wears earrings with a design that they point to is similar to the design of the Rising Sun Flag, a symbol of Japanese imperialism, but due to protests in South Korea via the internet, the design has been changed in that country’s broadcast. However, it has not been changed on the Netflix platform outside of South Korea, such as Australia.

At first glance, protests against Netflix seem pointless. This is because Netflix only acquires the distribution rights of different licensing companies for various countries and does not have the right to modify content in other countries, such as Australia. However, protesting against content produced in Japan seems to have become a trend in South Korea and has attracted attention on social media whenever it appears.

In a South Korean comment forum, different comments can be read for and against this protest. “Japan, an ally of the Nazis, a country inhabited by war criminals”, “Netflix supporting war criminals, one should apologize and make sure it never happens again”, and “It looks like Netflix wants to be boycotted “.

As of the writing of this article, the streaming platform has not yet made an official statement on the discussion.

Despite the discussion, the animation and its film continue to gain resounding success. On Monday (10) the film Kimetsu no Yaiba: Mugen Ressha-hen was officially considered the most successful box office film. The film amassed the equivalent of $ 435 million outside the United States and about $ 39.6 million in that country.

Synopsis:
Japan, it was Taisho. Tanjiro, a kind young man who makes living selling coal, finds out that his family has been slaughtered by a demon. To make matters worse, Nezuko, his youngest and only surviving sister, was also turned into a demon. Overwhelmed with this grim reality, Tanjiro decides to become a demon slayer to make his sister human again and to kill the demon who killed his family. A sad tale about two brothers, where the fates of humans and demons intertwine, begins now.

More about:
Koyoharu Gotouge’s manga has already inspired a television anime that debuted in April 2019. The main members of the anime series team are returning for the sequel. The TOHO and Aniplex are dealing with the distribution of the film. Haruo Sotozaki (Tales of Symphonia the Animation) directed the anime at Ufotable (Kara no Kyoukai, Katsugeki: Touken Ranbu) was also credited for the scripts. Akira Matsushima (Tales of Zestiria the X) was the character designer, with Miyuki Satou, Youko Kajiyama, and Mika Kikuchi serving as sub-character designers. Yuki Kajiura (Sword Art Online, Fate / Zero, Madoka Magica) and Gou Shiina (Tales of Zestiria the X, Juni Taisen: Zodiac War, God Eater) composed the song. Hikaru Kondo produced the series.