Well, we all saw how the latest episode of Star Trek: Discovery has featured a new revelation that has caused a drastic change. It has now made the films of Kelvin’s timeline a canon and that too, officially. It all started with the Star Trek of 2009. We saw that J.J. Abrams, the director of these films and his crew, established a brand new continuity for his franchise that was different from the mainstream ones, that is, The Original Series.

Well, over the years, we witnessed that this contemporary Trek shows from CBS All Access have all reverted back to the prime timeline. Although, we know how Discovery has now made a potential effort to connect these two timelines which were going on in their own certain direction. In the third episode of season 9, the audience came to know that the Federation is quite aware of the existence of the Kevin timeline. Then we see the mysterious Kovich who might be an agent of Section 31.

Kovich explains to Dr. Hugh Culber that there was a 24th-century Starfleet officer whose name was Lt. Commander Yor. This person can be considered as a time soldier as well as a veteran of the Temporal Wars. He was the first person who ever traveled forward in time. He was also the first one to cross over to a parallel universe. Specifically, it was shown to the audience that he traveled to an alternate reality which was created by the temporal incursion of a Romulan mining ship.

Obviously, this is a clear reference to Nero. Nero is the Romulan villain who existed in the 2009 film. He was the one who came to know about the alternate timeline when he journeyed back a hundred years and eliminated the U.S.S. Kelvin. He also killed George Kirk who was the father of James T. Kirk. Yor is the one who has come from 2379 and can be thought of as wearing a Next Generation uniform as well. It tells us that a version of the TNG era might have taken place in the timeline of Kelvin after Kirk and the company of Chris Pine retired from the Enterprise.

Will we ever have a crossover?

Well, you guys should know that this could be a neat way to please the fans but then again, we should always keep the major repercussions that might take place in the future of Trek. Now we know that both the timelines are aware of each other’s existence. Also, this factor means there could be a point in time in the future where we might have a crossover. After all, we have Kovich who reveals that Starfleet has a way to traverse between various universes. Although, this task was banned because of the Temporal Wars. We “might” see that EP Alex Kurtzman who has scripted the films along with Abrams has something up his sleeve. 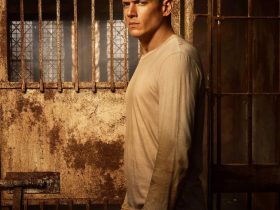